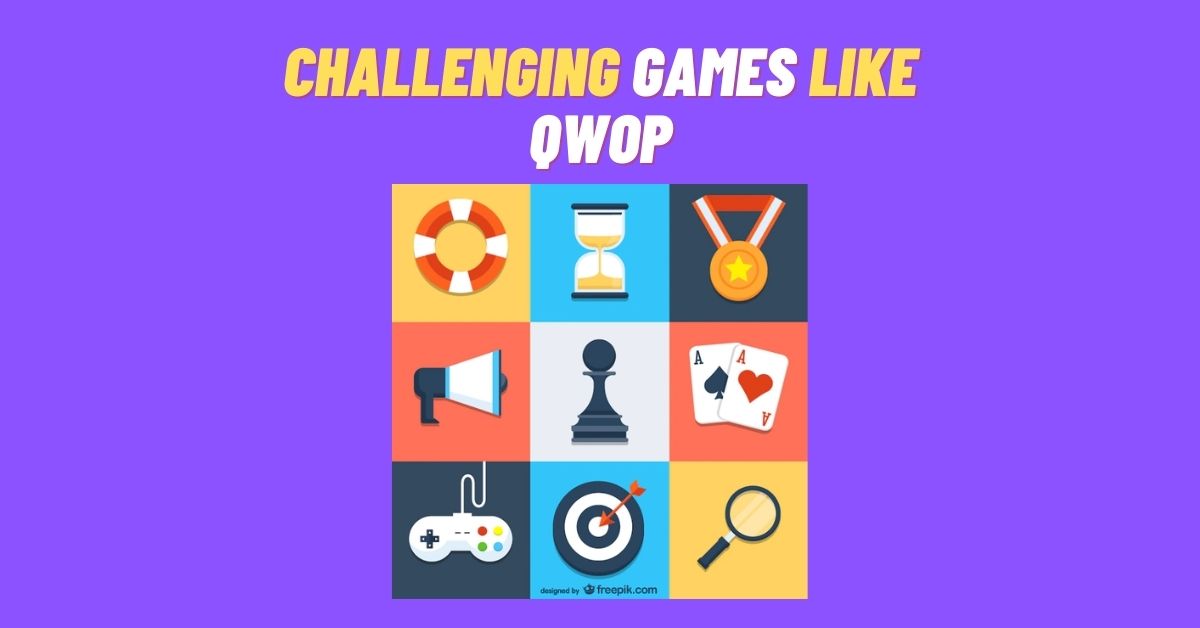 Games like QWOP: Do you love the challenge of playing QWOP but are looking for something different? If you like to play arcade games that test your reflexes and require skillful timing, then you have come to the right blog!

We have compiled a list of 6 games similar to QWOP but come with a unique twist in gameplay, graphics and even sound effects. Explore this list of games like QWOP that offer an exciting challenge, requiring you to sharpen your skill.

The game’s objective is to use these keys to help QWOP run as far as possible down the track without falling. However, the controls are very difficult to master, and it is easy to trip and fall. The game has a high difficulty and requires a lot of practice to get the hang of it.

GIRP is a simple flash game like QWOP where you use the keyboard’s letters to control a character who must climb a series of platforms to reach the top of a cliff. The game is played by pressing the corresponding letter keys on the keyboard to move the character’s arms and legs to grab onto and climb up the platforms.

The game’s objective is to reach the top of the cliff as quickly as possible without falling. To play GIRP, you will need to use the following keys:

As you progress through the game, the platforms will become increasingly difficult to navigate, requiring precise timing and coordination to climb successfully. If you fall off the platforms, you will need to start that level again.

Short Life is a physics-based puzzle platformer game in which you play as a stick figure character who must navigate a series of increasingly difficult levels. The game’s objective is to reach the end of each level without dying, which can be achieved by carefully navigating through a series of obstacles and hazards.

In Short Life, you have a limited number of lives, and each time you die, you will need to start the level over again. The game features a variety of hazards, such as spikes, saw blades, and falling objects, that you must avoid in order to survive.

Short Life is known for its challenging and often humorous gameplay, as well as its unique art style. The game is available on some websites and can be played on a computer or other device with a web browser. If you’re a fan of puzzle platformer games and enjoy a good challenge, Short Life is definitely worth checking out.

Lucky Life is a physics-based puzzle platformer game that challenges players to navigate a series of increasingly difficult levels. In the game, you play as a stick figure character who must avoid a variety of hazards and obstacles in order to reach the end of each level.

One of the key features of Lucky Life is its challenging gameplay. With a limited number of lives, each level requires careful planning and precise movement. The game features a variety of hazards, such as spikes, saw blades, and falling objects, that can kill your character if you’re not careful.

Despite its challenging nature, Lucky Life is a highly enjoyable game that is sure to keep you coming back for more. Its humorous elements and unique art style add to its overall appeal, and the varied levels ensure that the gameplay remains fresh and interesting.

In addition to its single-player mode, Lucky Life also includes online leaderboards that allow you to compare your scores with other players around the world. This adds a competitive element to the game and provides an extra incentive to keep playing and improving your skills.

Flip Runner is a physics-based platformer game in which you play as a character who must navigate a series of increasingly difficult levels. The game’s objective is to reach the end of each level as quickly as possible without falling off the platforms or hitting any obstacles.

In Flip Runner, you control your character movements using the arrow keys on your keyboard. You can jump, double, and flip to avoid obstacles and reach higher platforms. As you progress through the game, the levels become more challenging, requiring precise timing and coordination to complete.

Flip Runner is known for its fast-paced action and challenging gameplay. The game is available on several websites, including Kongregate and Cool Math Games, and can be played on a computer or other device with a web browser. If you’re a fan of platformer games and enjoy a good challenge, Flip Runner is worth checking out.

JollyWorld Game is one of the most popular mobile games today. Developed by JollySoftware, it combines the classic, pixelated style of the 1980s with modern graphics, creating a unique and immersive gaming experience.

In JollyWorld Game, players take on the role of a brave explorer, navigating through a world full of puzzles and monsters. As they progress, collect power-ups, upgrade their gear, and fight increasingly powerful enemies. Players will also discover hidden secrets and locations, giving them the incentive to explore every corner of the game.

The game features a variety of vibrant, detailed environments, providing players with a vast world to explore. The puzzles are challenging but not overly difficult, giving players a sense of accomplishment when they overcome them. The combat system is easy to learn and provides plenty of opportunities for creative strategies.

JollyWorld Game is available on both iOS and Android devices, making it accessible to a wide range of players. Its engaging gameplay, charming visuals, and immersive atmosphere make it a great choice for anyone looking for a quality mobile game.

“Getting Over It ” is a puzzle-platformer video game developed and published by Bennett Foddy. The game was released in 2017 for Microsoft Windows, macOS, and iOS.

In the game, the player controls a man named Diogenes, who is seated in a cauldron and must use a sledgehammer to navigate a series of increasingly difficult landscapes. The game is known for its high level of difficulty and its use of a voiceover by the developer, Bennett Foddy, who provides commentary and encouragement to the player as they progress through the game.

Getting Over It has received positive reviews from critics and has been described as a challenging and frustrating but ultimately rewarding experience.

Play Getting Over It

If you enjoyed the challenging and frustrating gameplay of QWOP, there are plenty of other similar games out there that you should try. Some of the most challenging games like QWOP. Each of these games offers its unique challenges and obstacles that will test your skills and patience. Whether a seasoned gamer or a newcomer to the world of frustratingly difficult games, these six games will provide you with hours of entertainment and frustration.

How do I play QWOP?

To play QWOP, you use the Q, W, O, and P keys on your keyboard to control the movement of the character legs.

What is the goal of QWOP?

The goal of QWOP is to try to run the 100m dash as quickly as possible without falling.

Can I play QWOP with a controller?

QWOP was designed to be played with a keyboard, and it may not be compatible with a controller. However, you can try using a program that allows you to map controller buttons to keyboard keys to see if that works.

Is QWOP available on mobile devices?

QWOP is not available as a standalone mobile app, but you can play it on some mobile devices through a web browser.

Is QWOP appropriate for children?

QWOP is a simple game that does not have any inappropriate content, so it is generally suitable for all ages.

No comments to show.